For today’s Paint Out Norfolk session, I went off-piste and followed my nose to a site called St Benet’s Abbey on the river Bure in the Norfolk Broads. Once again my Sat Nav was very ‘creative’ but I arrived eventually. The standing gatehouse to this monastic ruin had been requisitioned in the 18th century by a windmill enterprise and thus had been spawned a curious hybrid – half Gothic stone ruin (all arches and pinnacled pilasters) and half industrial construction (stolid, no-nonsense brick). The combination was extraordinary and irresistible, with strange juxtapositions of form and materials.

Many people passed through this seemingly remote site and quite a few stopped for a chat and an enjoyable afternoon was spent. The sun lowered by the end of the afternoon and the colours deepened. I was loathe to leave and felt I had not finished with this site – I hope to return at a later date. 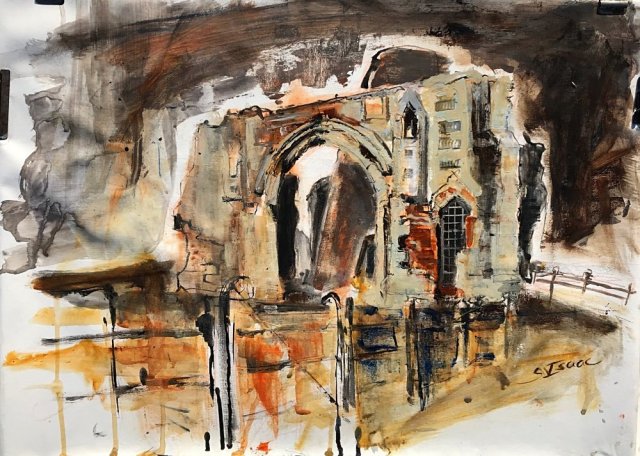