The Ram at Newark on Trent 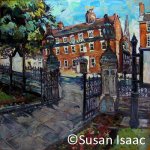 Susan Isaac – The Ram at Newark-on-Trent

I was asked recently to create a portrait of ‘The Ram‘ at Newark-on-Trent, a former hotel that has been lovingly refurbished and re-opened as a bar and brasserie by the Derry family.  The handsome three-storied Georgian facade stands in a fine run of buildings making up the historic north-west curtilage of this beautiful market town. The Ram stands, prominently, opposite Newark Castle and the former Gilstrap Library (now a registry office). I chose a viewpoint just in front of the Gilstrap that allowed me to frame the elegantly restrained, warmly sunlit, orange-red brick facade of The Ram behind a fanfare of filigree railings and municipally solid 1880s stone gate piers.

The painting is on a large canvas at 120 cm square and on Monday I accompanied it, with an almost parental anxiousness, to its new home at The Ram, where it now hangs opposite the longest bar I have ever seen. I am glad to say it was greeted with great warmth and  I hope the painting will be enjoyed by those who drop by to drink or dine.