Newark Paintings at Thoresby and Harley

I haven’t written for a while as I’ve been so busy painting, putting on an open studio and sending work to galleries. As Christmas approaches, I wanted to put down something about the pieces I’ve been working on during the latter half of the year.

I’ve been wanting to paint more views of Newark-on-Trent. Just five miles away, it is our local market town which we visit every week to shop and to use its cafes and occasionally its pubs. Newark is a beautiful townscape with a mixture of Medieval, Georgian and Victorian buildings together with a compelling ruined castle and an extraordinary market square. This year I have made a particular effort to focus my ideas on how to capture some of the essence of the town in my paintings. 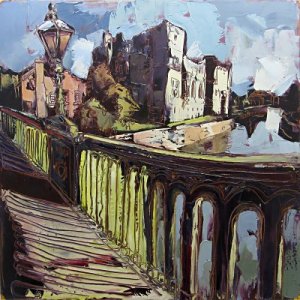 The castle dominates the western approach to Newark as you walk or drive over Trent Bridge. I made several views of this during the Summer. In the first of two shown here, I was struck by the pattern of light filtering through the railings of the bridge. The railings themselves seem to march across the river towards the stricken castle. I exhibited this in the Thoresby Open Exhibition in September – it was joint winner of the ‘Tony Wilkinson Prize’ and also the ‘Solo Exhibition Prize for 2012’ which means I will be  hold an exhibition at Thoresby sometime in 2012 (dates to be decided). The painting is now on display at the Newfield Galleries in Newark. 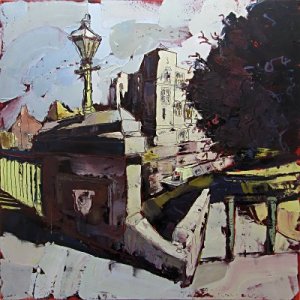 In the second painting I enjoyed creating a composition that contrasts the monumental bridge parapets with the more distant blocks of the castle. The interplay of light and dark was also a strong element in this historic juxtaposition. This painting has been selected for the first Harley Open Exhibition which will be running from 7 Jan – 5 Feb, 2012.